Apart from the honeymoon, the biggest expense for people getting married is the reception after the marriage ceremony. Traditionally, newlyweds put on massive spreads to entertain their guests, and the bills can run into the tens of thousands.

These days, however, a growing number of people getting married are scaling back on the celebrations and deciding that less can, in fact, be a whole lot more. After all, just how much food can people eat in one sitting?

Here we give you wedding catering ideas on a budget.

The thinking for some couples is: why waste enormous sums on catering for dozens or even hundreds of people when it can either be saved or put to better use on a more lavish and longer honeymoon.

Besides, five or ten years after the big day, who’s going to recall what they dined on? They’ll remember the ceremony, the ambience, the toasts and that’s about it. An increasing number of people tying the knot have little interest in endless courses of staid dishes, opting instead for more creative and interesting options.

One simple idea that can also be elegant is to do away with the notion of served courses and instead have a buffet table where guests can get their own. They can come and go from it as they please, and there might be one table for starters, one for soups, another for mains, and one for desserts.

Perhaps it might be an idea to do several tables with themed main courses — say, a “His” and “Hers”, the favourites of the newlyweds, which could, for example, be Indian and Japanese, or Italian and Spanish or Mexican and Thai. It would infuse a fun element into what can sometimes be a dreary affair at wedding receptions, as some people try dishes they’ve never had before.

To save money, it may be a great idea to cater the simpler parts of the menu on your own and leave the rest to an outside caterer. Appetisers for when guests arrive at the venue would be a relatively easy one to cater — crackers and cheese, cocktail sausages, crudités (which are just sliced raw vegetables) with dips like hummus and guacamole and so on. Appetisers ordered in can cost a fortune for such morsels, and they’re simple to make in advance, so this would be a good place to start if you’re looking to cut costs.

You could also consider just having appetisers, on a buffet table, and that’s all, with no mains or desserts. Most people are not going to want to stuff themselves, and as long as there’s plenty to go around, that’s all that really matters. Don’t forget, there’s also cake.

When choosing the reception venue, you need to know if they insist on providing their own catering, if it’s, say, a hotel, or if it’s somewhere else, like a hall or club, where you can bring in outside catering as well as doing some of your own, if you so wish.

If you’re insisting on a full, multi-course dinner that’s served, you might like to experiment with simple yet classic dishes that are light on the stomach and the wallet. That could mean taking meat dishes and serving them in artistic arrangements with smaller portions. Or conjure your own dishes entirely. You will also have to consider those who may be vegetarian or vegan. 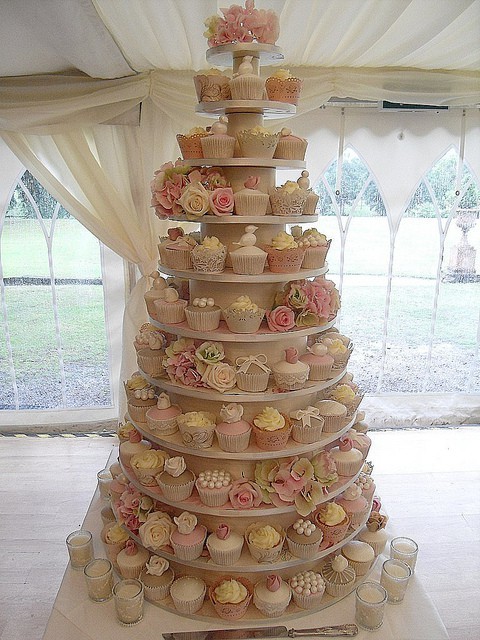 Nowadays everyone knows a friend or family member who makes cupcakes. You could opt for an early wedding followed by a celebration lunch, instead of a more expensive dinner. This, again, could be a served sit-down or a buffet.

For drinks, simply serve one to each guest, a special drink like a fruity, showy cocktail such as a piña colada, and after that they can buy their own from the bar. You don’t want the shock of an enormous bar bill on your wedding night.

And when it comes to the all-important wedding cake, consider some ideas that make it easier to save and easy on the pocket. One idea might be a towering cupcake cake, stacked like a wedding cake and no cutting or plating involved — just one for everyone who’s there.

For a unique range of wedding catering ideas including Fish and Chips, Gourmet Burgers, Mexican and more click here